Built in 1930, Jiji train station is an old station built by cypress. It can be considered as the landmark of Jiji Township and the most well-known station on Jiji line. It was once destroyed due to “921 Earthquake”. The current station had been reconstructed with Japanese wooden appearance retained. Now, it is the only station that left from Japanese ruled period.

In the early days, Jiji line mainly transported construction materials for power generation factory. Later on, as this place has become prosperous, Jiji line started to take on the transportation function of passengers, agricultural products and wood along the line. It is a living historic site that witness the economic values of railway branch line. It has lots of special features among the nostalgic railways. 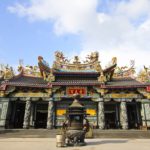